I myself don't like change, rarely will I even try something thing new off the Chinese menu. I am the same way with mediums and media, I use mostly acrylic through an airbrush or just lead pencil, a B, 2B, or I might get crazy and use a 4B. These would be the only two mediums I would use, for the last ten to fifteen years. Now and then I would use ink through a felt tip pen, between 0.4 to 0.2 mm.

I like ink, it's a very yes or no tool, black or white, no grey, no maybe...But now and then I don't mind a maybe or a kind of, to get vague, dreamy like somethings there but not. A ghost. 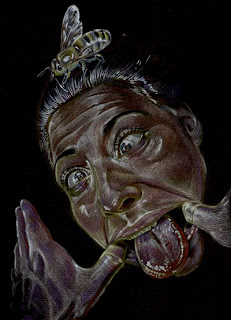 Lately I came across some artwork by Apricot Mantle the colors were so strong, they leapt off the page, I could not believe the images were created in pencil, and the detail inside the drawing were out standing. So much so that I had to try this color pencil.

I went out and bought some, a pack of twelve for around $24, and personally I'm bit of a cheapskate, so this was a bit outlandish for me. And then I didn't use them for a good six weeks, the colors I got in this tin box were all over the place, you couldn't draw a rainbow. So I went out again and purchased a 24 set for $50, where you could draw a rainbow, and it was fantastic, I've never used a pencil like this, they stood out and could mix with each other not unlike oil pastel and yet not one to smudge which I like, so often I'm drawing  smudging away the work I've done, oblivious to what I've done with the other end of my hand resting on the paper.

The pencils are called primacolor they are every where and are not hard to find, it's not often I try new things, but I'm glade I did.
Posted by Dale at 07:58